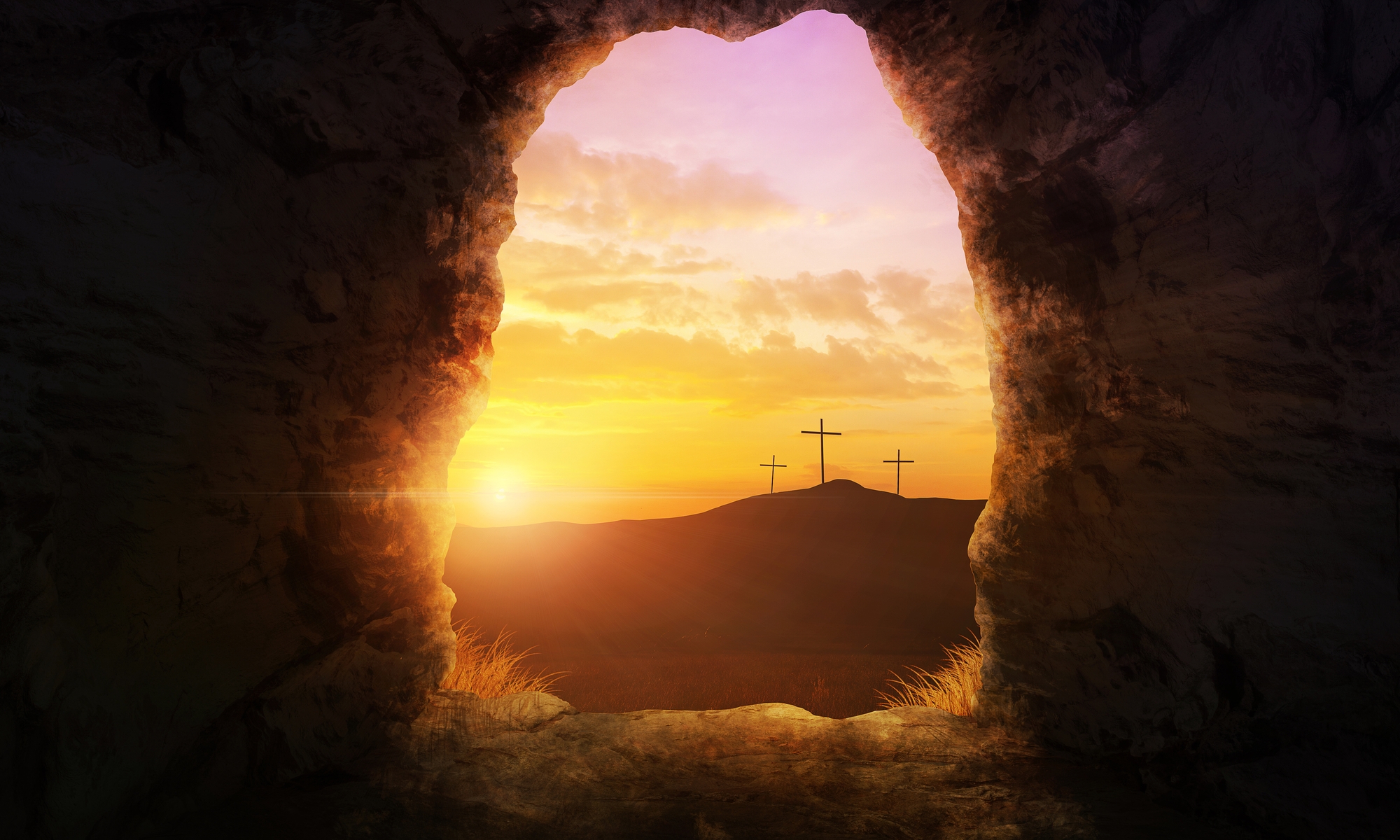 I know, it sounds like a weird topic.  Tombs don’t talk—do they?  When Jesus rode into Jerusalem on a donkey, the people were praising God for the things they had saw.  The Pharisees called for Jesus to rebuke His disciples and He responded, “I tell you that if these should keep silent, the stones would immediately cry out” (Luke 19:40 NKJV).  My thinking is, “If stones cry out, I guess tombs could talk!”  Just a thought…

Scripture: “And entering the tomb, they saw a young man clothed in a long white robe sitting on the right side; and they were alarmed. / But he said to them, “Do not be alarmed. You seek Jesus of Nazareth, who was crucified. He is risen! He is not here. See the place where they laid Him” (Mark 16:5-6 NKJV).

If Tombs Could Talk!  So I begin as a rock, just outside of the ancient city of Jerusalem near the place called Golgotha.  As a big rock, I often wondered what I would eventually become.  Maybe I would be hewn into stones for a great building.  Perhaps, I would become a monument for a great king.  I could be cut into pieces and used as a fortress wall.  My mass may be chipped into pavement for a king’s highway or perhaps small stones for a fancy garden wall.

One day I realized I had been purchased by a rich man by the name of Joseph of Arimathea.  When I heard this rich man had purchased me, my hopes soared to the sky.  He was rich and a prominent member of the Jewish council and what great things he may do with a piece of rock like me.  Maybe he had plans to build a large house and I would be a cornerstone in a wall or a keystone over a great archway where the rich and important would enter his beautiful home.

Some weeks after, I heard the workmen making their way to me; my expectations rose.  Now the waiting would end and the unknown would be known.  The two workmen began to choose their tools from their wooden toolboxes, a measuring line and some chalk.  They began to draw out some lines and step back to view their design.  Surely this would be some grand design.  They seemed satisfied with their lines so now the work began.  Hammers and chisels seemed to be the tools of choice.  I could hear the wham of the hammer and the shattering of my rock.  What?  With all of their drawing their chiseling was so random.  They were just bursting my rock into hundreds of little chucks and slivers.  Pieces of my rock were flying everywhere.

Toward the end of the day, they had carved a cubit beyond my face.  As the workmen caught their breath and quenched their thirst, they began to speak of their work.  One said, “I believe Joseph will be happy with his tomb, eventually his whole family can be entombed here.”  All my dreams came crushing down at the word “tomb”.  My dreams of grand cornerstones, archway keystones, and large monuments faded to the horror of rotting flesh, fowl smells, and eventual dried bones.  So my purpose was to be a tomb, a dead-end!

So instead of decorating the living, I would be entombing the dead.  What a destiny?  Instead of sunshine and flowers, my life would be of the dead and the decaying.  The blows of the hammer before knowing were with anticipation but now their sound was embraced with dread.

The workmen finished their task and left fulfilled in their handiwork with a few extra denarii in their purses.  I felt as empty as the cavern they had created.  Now all I could do was wait.  There would be that fateful day when the funeral procession would come and bring dead Joseph or one of his departed kin to be laid in my cold, dark arms.  Afterwards my agony would be worsened by the cries of the mourners bewailing the departed souls.  Until then I would enjoy the warm spring breezes and the chirping birds until my cavern grave was closed for eternity.

Not far from my post was a place called Golgotha, the place of a skull.  It was a hill of mostly rock resembling the skull of the dead.  I often heard the familiar sound of a Roman crucifixion.  I could hear the clang of the hammer driving nails and the screams of the condemned.  Wives and mothers could be heard crying for mercy and wailing prayers to God for deliverance.  This horror often continued for days until the dying were dead.  Hearing the sounds made me colder still.  How could one man cause another so much torture?  Surely their hearts were harder than my stone.  It made me glad I was rock.

I knew Passover was near from the many pilgrims trekking past.  It was a time of festivities and worship for the Jews; a time of celebration for God’s salvation and deliverance from Egyptian bondage and the promise of a destined home.

The day of Passover arrived.  Not being able to see beyond the garden gate, I still knew that something was amiss.  The sounds of celebration had now turned into a riot.  Sounds of “Crucify Him! Crucify Him!” thundered from the direction of Pilate’s Praetorium.  What sort of man could raise such a uproar?

I could hear as the crowd moved from Pilate’s courtyard toward Golgotha.  I knew what awaited the poor soul who would receive Rome’s rage.  It was now mid-morning as the soldiers drove the nails amidst the screams of the victims and jeers from the crowd.  An hour later, only subdued sounds came from the crowd as they watched; some in horror, others in wicked glee as men writhed in tortured pain.

Now it was high noon and the unheard of, happened—it became as dark as night.  There was a cold breeze that blew through Jerusalem not brought by the chill from the north but as if evil was having its way.  Then the earth began to tremble and I was afraid my hollowed tomb would implode from the force but yet it was somehow held together by a purpose beyond understanding.  The darkness lingered to mid-afternoon.  I was held in suspense of these awesome occurrences of this holy yet frightful day.

Then the garden gate leading to my entrance creaked open with men carrying a body, followed by crying women.  I knew two of the prominent men, Joseph and his fellow council member Nicodemus.  Whose body would they be carrying that would cause them to defile and prohibit their participation in the all-important Passover.  All of the pallbearers were stained by blood from the brutalized body.  Who could he be?

As they brought him in I saw his face…  Oh no!  All of creation and even the demons of Hell recognize Him well; He is the Christ, the Son of the Living God!  He is dead!  How can this be?  He gives life to all yet He is dead!  No!  No!  Something has gone horribly wrong! No! No!

Even these good men do not understand.  They wash His body, anoint Him, and hurriedly wrap Him in new linen cloth as if He was only their brother or uncle.  Do they not realize He is the Son of God?  They seem to love Him but without recognizing His full worth.

They lay Him on my stone and roll the closure-stone over my opening.  Now we are alone, Jesus and I.  I am only stone but I hold Him as best I can in lieu of His mother.  If I had human eyes I would have cried until no tears were left.  If I had a mouth to scream, I would have wailed.  I had neither so I lay in cold stillness with His body.  He was as cold and still as me.

Wait, did I hear a delighted evil shrill?  Yes, those vile minions of Hell are celebrating His death.  I wish I could crush them with my massive stone until their greasy blood ran dry.  I have heard this sound before when they jeered the wicked dead to Sheol.  This makes no sense!  How could He die and how could He enter the place of the dead.  Now silence again; an eerie silence that causes the brave to shake.

I cradle the body of this dead Son of God through the twilight evening of the first day, then into the night and day of the second (the Sabbath), and into the third day beginning at dusk as the custom of the Jews.  This first day of the week continued from the third star visible in the early night.  Just before the rising of the sun while darkness still prevailed, my darkness now filled with light but it was not that of the rising sun.  What is happening?  I first feel a twitch, then a shuffling sound as one who wakes from sleep.  Can this be?  This body of the Son of God is moving.  HE’S ALIVE!  HE’S ALIVE!  Two angels appear to help Him un-wrap the grave clothes.  He makes His way from my crypt and stands tall as an oak.  He looks back into my grave and smiles as if to say goodbye, you have served me well but I have no more need of your cave.

He walks through the gate toward the rising sun and now it dawns on me that I have housed the King and borne the Risen Savior.  My stone will stand as a monument to all people in all of time that He lives forevermore and He has vanquished the powers of the grave and death.  He lives to reign as King and to be worshipped as Lord, never to die again.  He was from eternity and He lives forevermore.  He has conquered death and Hell and brought eternal salvation to all who call on His name and live in His life.  He is the cornerstone of the house of salvation and He is the keystone and the door of the archway to life.  I held Him briefly in death, you can embrace Him for eternal life.  HE LIVES!  HE LIVES!